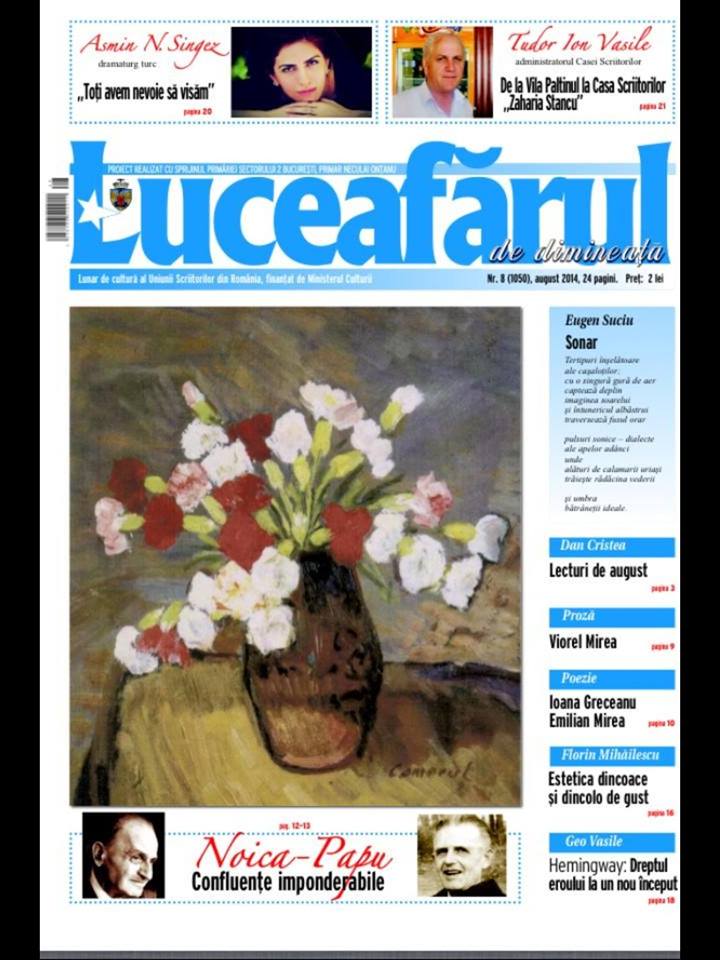 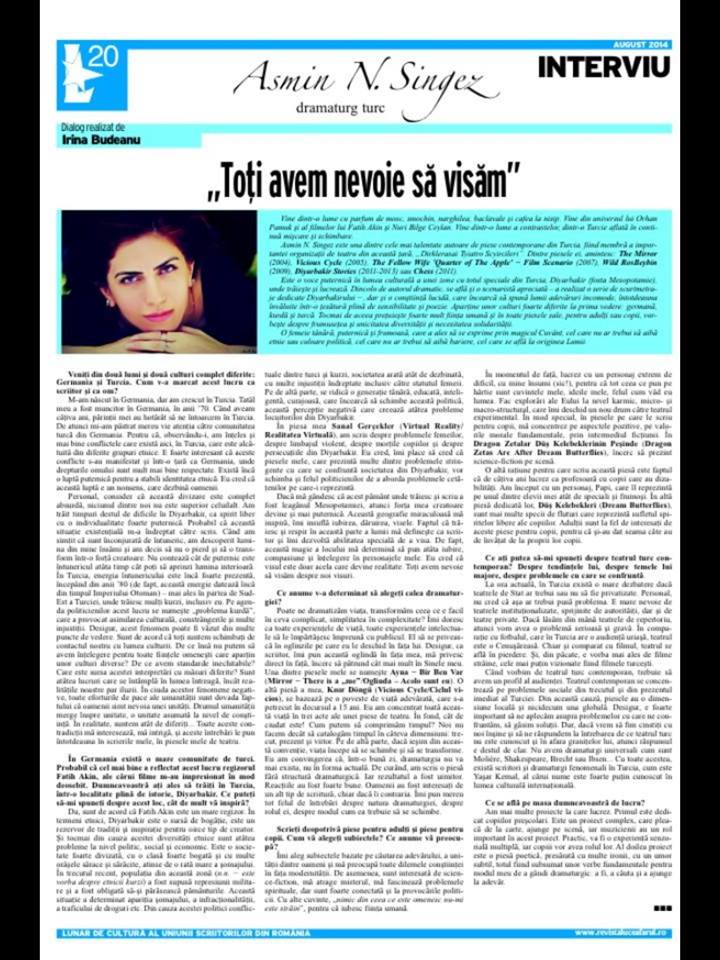 “All we need to dream about new dreams”

4. Write songs for adults and both pieces for children. How do you choose topics? What exactly would you?
I choose topics based on the quest for truth, unity between people and I would all the dilemmas of conscience in the face of modernity. I am also interested in science fiction, the mystery attracts me, fascinates me spiritual matters, but I am very connected to the policy challenges. In other words, “nothing that is human is alien to me not”, because I love the human being.
Currently, I’m working with an extreme character difficult, with myself (sic!), because everything you put on the paper are my words, my ideas, how I see the world. Make explorations of Self, at charmic level, micro and macro structure, which would open a new path to experimental theater. In particular, in which I write for children, my focus is on the positive aspects, on fundamental moral values, through fiction. In “Dragon Zetalar Düş Kelebeklerinin Peşinde (Dragon Zetas Has After Dream Butterflies)”, I try to introduce science fiction on stage.
Another reason for writing this piece is the fact that for several years working as a teacher with children who have disabilities. I start with a character, Papi, who represents one of my students so special and beautiful. In another piece dedicated to their “Düş Kelebekleri (Dream Butterflies)”, there are several species of butterflies, which represent the soul free spirits of children. Adults are just as interested in these parts for the children, because they realized how much they learned from their own children.
5.What you may want to tell me about contemporary Turkish theater? About his tendencies, about his major themes, about the problems they face.
At the present time, in Turkey there is a big debate about whether State theaters should be or not to be privatized. Personally, I don’t think such a question should be asked. It’s great need for institutional households, theatres supported by autorităiți, but also theaters privatized. If we leave the theatres Repertory, then we have a serious problem and serious. Compared to football, which in Turkey has a huge audience, the theater is a Cinderella story. Even compared to the movie, the theater is at a loss. And unfortunately, it’s mostly foreign films, the least-watched as Turkish films.
When we speak of contemporary Turkish theater, we should have a profile of the audience. Contemporary Theatre focuses on social issues from the past and from the present Turkey immediately. Because of this, the pieces have a local dimension and not the global one. Of course, it is very important to us bow our problems we face, to find solutions. But, if we want to be honest with ourselves and let us answer the question why the Turkish Theatre is not known outside of his boundaries, then the answer is pretty clear. We have playwrights like Molière, the global Shakespeare, Brecht and Ibsen’s … However, there are writers and playwrights in Turkey fenomenali, Yaşar Kemal, as whose name is little known in the world of international culture.
6. What is your next projects?
I have several projects on which I work. The first is dedicated to children. It is a complex project, which is based on the book, arrives on the scene, and the musicians have played an important role in this project. Basically, it will be a multiple sensory experience where children will have their role. The second project is a poetic piece, packed with many ironies, with a subtle humor, everything is off ering of basic verbs for my way of thinking drama: to be, to seek and reach the truth.
Irina Budeanu